Heroes from Opposite Sides of the World

You’ve heard it said that a picture is worth a thousand words, but this picture is priceless. It was a once-in-a-lifetime event for these people. They came from opposite sides of the world. They not only prayed and shared a meal together, but God used them to impact the world through a common vision. 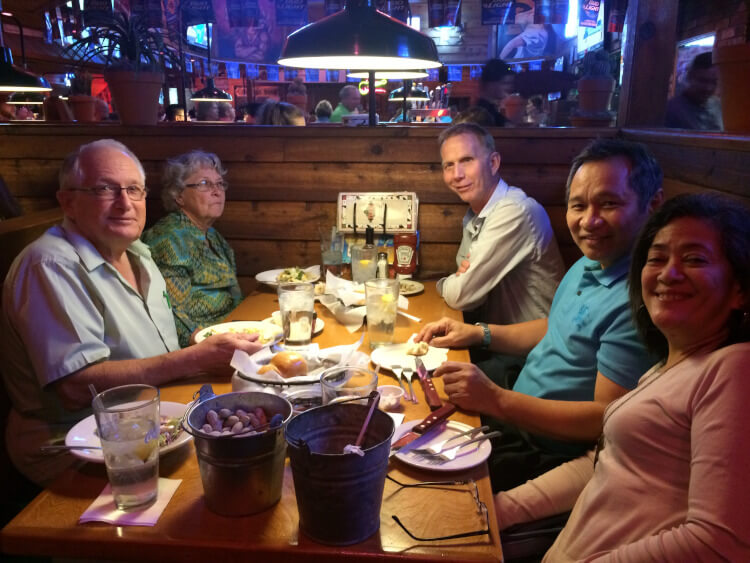 Dennis Pettit and his wife Sharon (on the left) are some of the heroes of GNPI. We consider them heroes because they prayed and sacrificed to provide financial support for GNPI and other ministries for many decades. Their vision was to spread the life-saving message of Christ to the world. It was fulfilled by the “sweat of their brows” as they worked the fields on the family farm. Dennis was crazy in love with his high school sweetheart Sharon and raised a fine family of whom he was exceptionally proud. They served countless hours in the local church and were pillars in the community. Dennis also served on ministry boards and as a college trustee. Anyone who knew Dennis never had to wonder where he stood. It was obvious that he deeply loved God and enjoyed helping others.

Bert Pacoli and his wife Nenette are also heroes of GNPI because they spent much of their lives working on the front lines with GNPI-Philippines. Nenette serves there as the regional director. Bert was Nenette’s biggest fan and remained by her side every step of the way. He served on the GNPI board and his local church board. He helped distribute GNPI media to the barrios, the inner city, and surrounding islands. He did this many times at his own expense to share Jesus with his countrymen. Bert traveled to other countries, hosted countless guests, and provided hours of transportation for visitors and team members to various locations, so production could take place. He provided space in their basement for GNPI to get started and later made the property available so a studio could be built. Hundreds of thousands have been touched through productions of encouraging and inspiring messages produced there.

These two men, who spent their lives on different sides of the globe, came together as co-laborers in a common vision. Each one was a vital piece in a global puzzle of sharing the transforming message of Christ to the world. This picture was priceless when taken, but it has now become even more so.

The year 2020 will go down in history as unforgettable. The world may remember it as the year of COVID-19. Christians may remember it as the year of never-before-seen ministry opportunities. When the pandemic locked the rest of the world down, it was heroes like Dennis and Bert who helped put GNPI in a perfect position to respond to the call for a message of hope. Kingdom impact for GNPI last year surpassed any other in the 45 years that God has allowed her to exist. GNPI teams were ready; technology, the Internet, and social media were in place to provide a strategic path to reach the lives and hearts of those searching for truth and assurance. Those who might have never darkened a church door in some countries because of fear of losing their lives or putting their family in danger found another option. It is those like Bert and Dennis who are God's heroes because they answered His call!

Shortly before Christmas, both Dennis and Bert were admitted to the hospital on opposite sides of the world with COVID-19. Much to our grief, their work on earth was done. We are confident that Jesus noted their impact as He ushered each into His presence saying, “Well done, thy good and faithful servant.” On December 30, Dennis lost his battle to COVID-19 and was called home to dwell with Christ (see obituary here). On January 21st (USA time), Bert gave up his fight and also entered the presence of Christ. The passing of these dear friends came as quite a shock to us here on earth, but God had already prepared a place. We can only imagine that Dennis and Bert may once again be together and seated across the table at the great wedding banquet in heaven. God has wiped away their tears, for there is no more sorrow, pain, or death. They are together forever with nothing but praise on their lips.

We thank you Dennis and Bert for your hard work, your example, and for being our heroes. You will both be missed greatly here on earth, but we will look forward to someday joining you at the table in heaven. We love you both and bid you so long for now.

Please join our team at GNPI in praying for the families of Bert and Dennis and honoring their priceless legacy by following their examples.