Walking Out God’s Calling with Confidence

I believe, as children of God, we are all designed and created to fulfill a part of God’s plan for this world. I have often struggled to know if I am truly walking out that calling. I am grateful for many scriptural examples of those who also struggled to understand their calling. I am sure that Joseph had a hard time seeing his calling while being thrown from one prison to another. Moses, an exiled fugitive who thought he was slow in speech, saw his calling from God as virtually impossible. While we might not see it immediately, it is such an awe-inspiring moment if we can reflect on our own lives to realize just how God has led us step-by-step all the way. It is times like these when we can confidently say that we are walking out the calling of God. 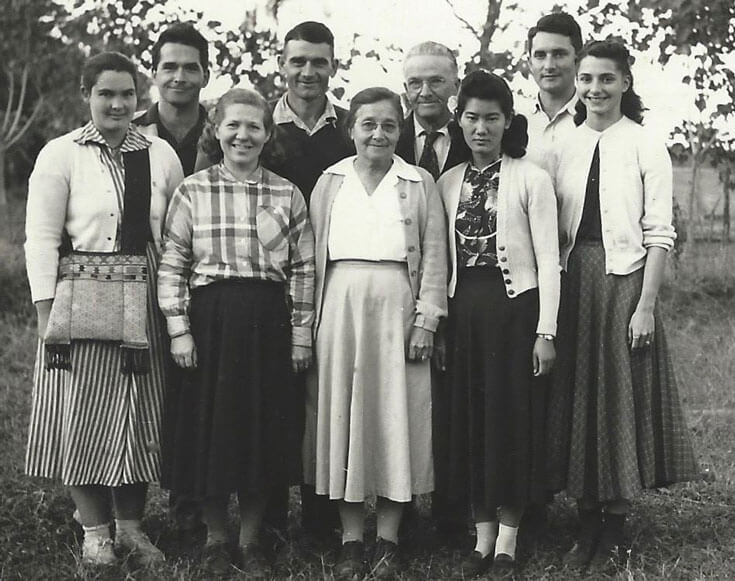 I come from a long line of missionaries. My great grandparents, J. Russell and Gertrude Morse, first answered the call to serve the Lord in 1921 in northern Tibet. Throughout the generations, God led my grandparents, and then my father’s generation, from one country to the next through many forms of testing and persecution. Communism in China and later in Burma kept pushing my family deeper into Asia for the kingdom. While they might not have known it at the time, their commitment to following God’s call impacted thousands for the kingdom of heaven. As you might imagine, this has had a massive effect on me and the choices I have made over the years to accept the call of God on my life. 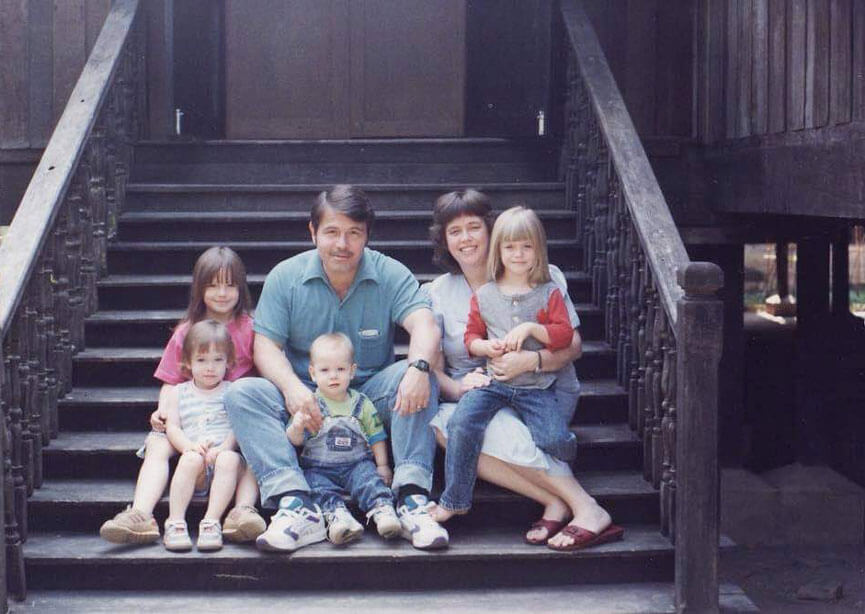 (Angela is pictured at the back left with her siblings and parents, Tom and Debbie Morse.)

As a missionary kid growing up in northern Thailand, I had many opportunities to be involved in mentorship. I helped with childcare services at mission conferences, assisted with childrens’ clubs, and tutored children in math, English, and piano. These experiences led me to seek out more moments where I could “see the light come on” in students’ eyes when they grasped a new concept. I especially enjoyed it when I could help them love a subject they once dreaded. I found myself volunteering to serve in many youth training activities over the years, from leadership roles at youth camps and training conferences to inner-city outreach programs, both in Asia and the United States. 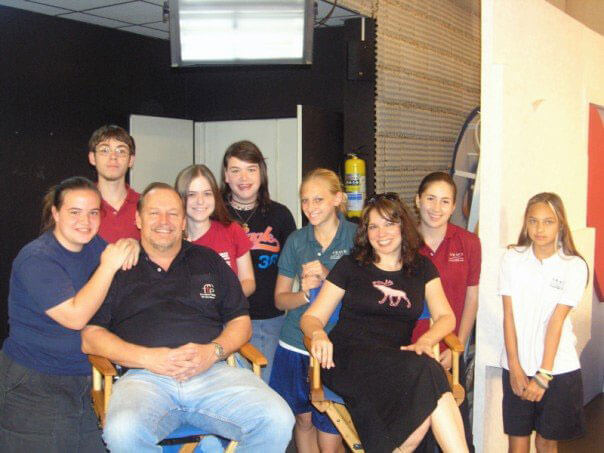 (Angela is on the left with her mentor, Tom Silkwood, and the rest of the Extreme Teens group.)

Meanwhile, I was developing a passion for media, inspired by Tom Silkwood, a father figure on our mission team. Tom attended Lincoln Christian College with my father, who recruited Tom to join the mission over 35 years ago. Tom started Freedom Films Productions within our mission team and worked in partnership with GNPI. Photography was my first love, but after high school, I was able to take a media class. The class led to an after school program called Extreme Teens Television that cultivated an interest in media in young internationals and missionary kids. 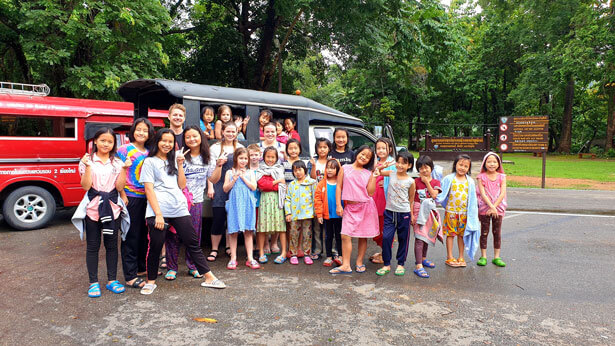 (Angela is in the center of the group from the Daughters of Ruth girls home.)

After high school, I had many years ahead of me in my journey to the calling God had for me. I spent a year in Indianapolis, training in counseling and working with juvenile delinquents in a live-in rehabilitation program. These experiences eventually led me back to Thailand, my first love, where I had the opportunity to work with a girls home called Daughters of Ruth and an associated prison ministry. I taught English and led Bible studies with these girls whose parents were in prison. Again, my love for mentorship blossomed while working to disciple these young girls.

I loved the work I was doing for the most part, but I felt that God was leading me to something more. Although I loved the girls, I did not find much satisfaction in teaching English. I had a deep-seated passion for teaching and discipleship, but I instantly became a nervous wreck when asked to speak in front of large groups of people. God still had a lot to teach me about relying on Him and walking out my true calling. 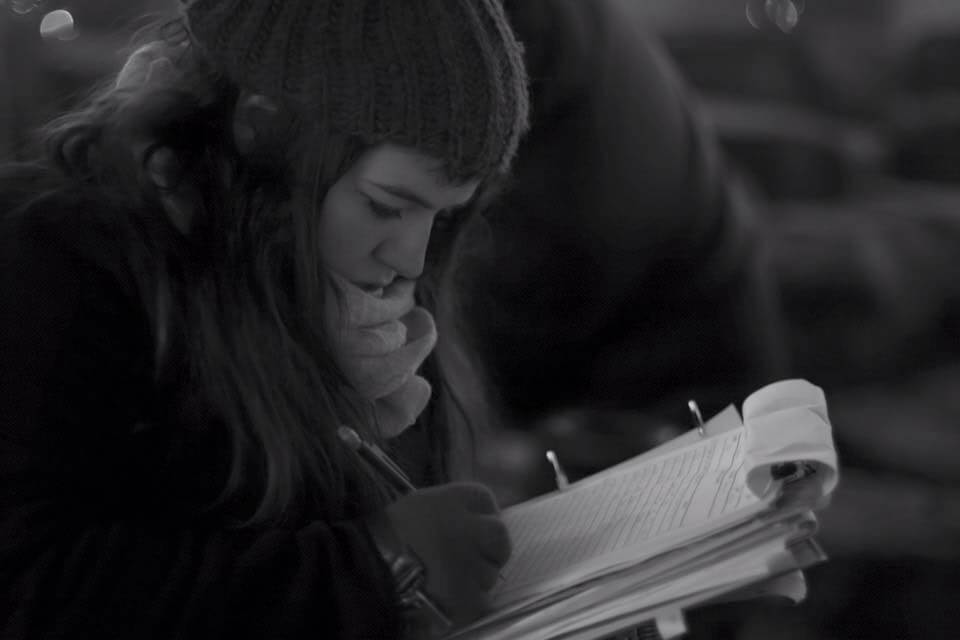 My mentor, Tom Silkwood, and I talked about rebooting the youth media trainings, but we both felt that to do this right, I would need more training. I would also need a bachelor's degree to receive the proper visa and work permit to do this kind of work in Thailand. So, at the ripe old age of 24, I returned to the U.S. for more training. I graduated four years later with a double major in Digital Media Arts, Cinema Concentration, and Graphic & Web Design. Each semester, I learned different aspects of film. I was also able to intern with a production company out of Los Angeles, Purpose Pictures, on a feature film called Gordon Family Tree. I was later asked to work as a script supervisor on their award-winning feature film, Parker’s Anchor. I also worked on a film with producers and directors from New York called Valley Inn. These experiences solidified my confidence in filmmaking and my love of the arts. Still, I knew I wanted to pursue this passion outside the U.S.

I returned to Thailand full-time in 2016. My lifelong mentor and father figure had suddenly passed away from a heart attack several months earlier. While this news devastated me, I was also painfully aware that we would not be working together in training the young people of Asia. I was determined not to let our vision die. I partnered with GNPI and the Thai media team at Freedom Films Productions, which Tom had built up over the years, to continue creating media in Thailand. 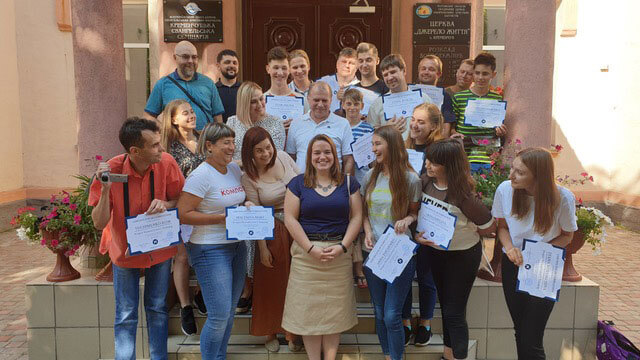 (Angela is in the center of the front row with a group of trainees from Eurasia.)

In January 2018, GNPI invited me to India to participate in a “trainers training” for a program called Project Nomad. This is a program to teach young people how to use their smart devices to create impactful media and develop discipleship relationships through follow up. I was able to put this training into practice in March of that year when I was asked to fill in as one of the video trainers for a conference. I started very nervously, but amazingly, I finished the week on cloud nine. This was it!  Finally, I felt that I had found the complete design of God for my life: using media as a tool for the kingdom of heaven to train and disciple others. 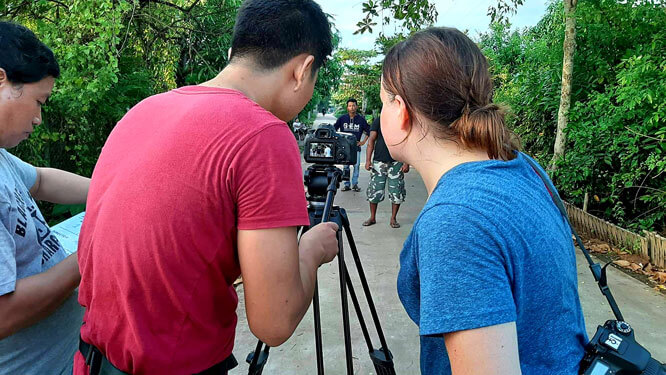 (Angela is on the right in the front providing Nomad training in SE Asia.)

Since then, I’ve had opportunities to teach in countries that impact Thai, Lisu, Burmese (as well as many sub-languages within this country), Ukrainian, and Russian language groups! One of the biggest highlights for me was getting to return to the country where my father was born and raised as the third generation of Morse missionaries. It felt like coming full circle, as I helped train the now second and third generation of national evangelists.

I thoroughly enjoy encouraging students in their abilities to share their stories of faith through media. I especially felt this in Ukraine when it became clear to me that words of affirmation were so scarce in their region. It was so fulfilling to hear that some of the students were going to be taking the training and videos created in class to share with students at their youth camps and teach other young people how to use these same skills. 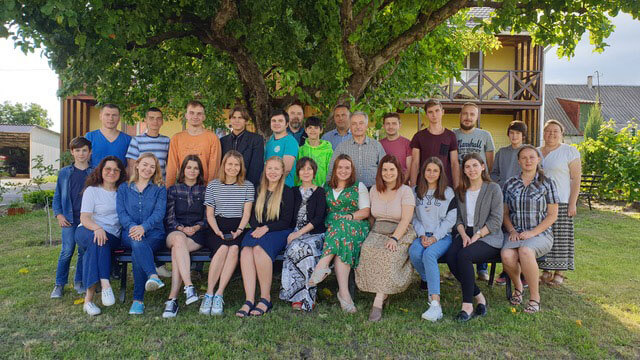 (Angela is fifth from the right on the front row with another group she trained in media production in Eurasia.)

Further confirmation in all of this is how I could stand in front of large groups of students and have absolutely no fear. I can combine my love for discipling young people with my passion for media! With the confidence that Christ gives me, I feel like I am reaching the hearts of these students. I hope that each one will, in turn, affect their communities and the world through the media and discipleship!

We each have a calling or gift from the Lord that we have a responsibility to use and share with others. As followers of Christ, in whatever we do, we are to disciple others and build each other up. I am convinced that media is the language of our generation to reach the world for Christ, and I am excited about my part in the kingdom work of discipleship!