Solar Kit: My Foot in the Door 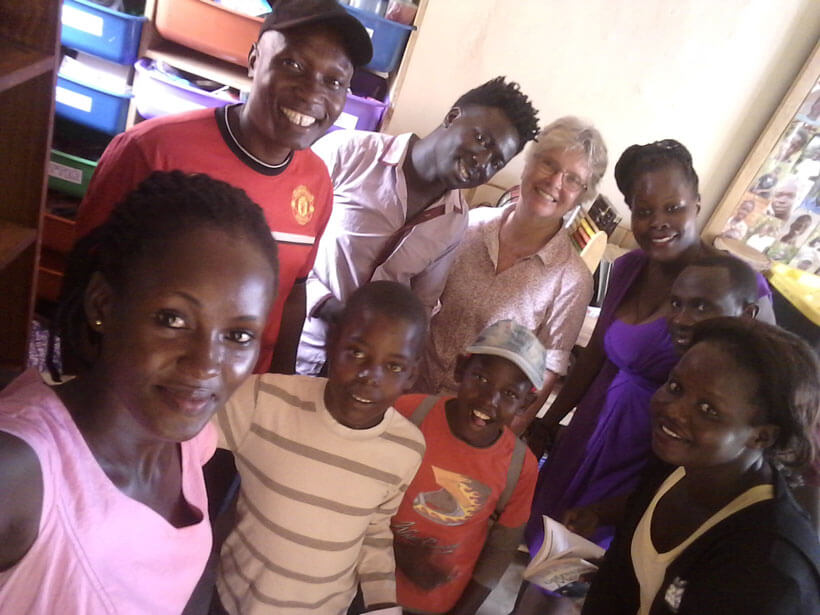 Peggy dreamed of going to Africa as a little girl in Ohio. “When I was very young, God put Africa in my heart. I didn’t even understand what or where Africa was, but I was fascinated by it. I remember when I was about five years old, my dad and I watched a National Geographic episode about Africa. Everything was so vibrant! The sky was bluer, the grass and trees were greener, the people were more beautiful, and the animals were bigger.”

Little Peggy grew up, got married, and raised a family, but her heart’s desire remained in Africa. After her sons grew up and her husband passed away, God finally provided a way for Peggy to go. Within a month of losing her husband, a friend asked her to pray about joining a mission team to Busia, Uganda. Peggy replied that she'd been praying about going to Africa for 50 years. Before leaving the airport in Entebbe, Uganda, Peggy said, "I'm home." 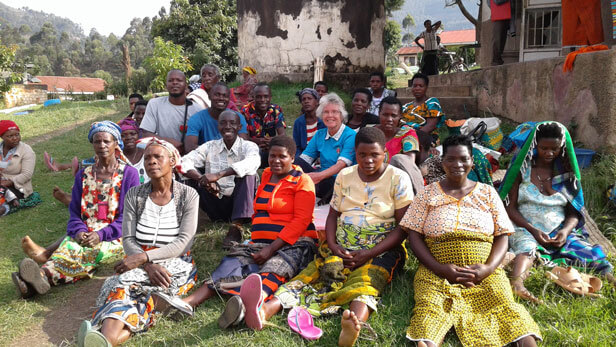 She sold her house, her car, and her belongings to sustain her new life and ministry in Africa. She said, “God placed me in Uganda, and I never looked back. I came, and I knew this was where he wanted me.

Peggy has a heart for broken people because she felt so broken for many years. She wants to help other people avoid the mistakes and pain she's experienced and share how God rescued her.

As I grew older, I finally stopped. God saved me from that life. I hit rock bottom, but I found Jesus is the Rock at the bottom. Me + Jesus is enough. My mess became my message. My Papa God reached down and took me in his arms, and he has never let go.

Then I started doing mission work. God gave me a servant’s heart. I’ve done mission work all over North and South America. Anywhere I could go, I went. My heart is a magnet for people caught up in drugs, alcohol, and those living on the streets. God shattered my heart, so when a tiny piece touches somebody else, we can sit, talk, cry, laugh, and pray. I can't judge those in a difficult time in life because I was there too. I have compassion because I understand it will eventually kill you.

God doesn't make mistakes. He made us on purpose for a purpose. If God has put a Goliath in front of you, he has put a David inside of you. I want to help others learn to tell their Goliath how big their God is. 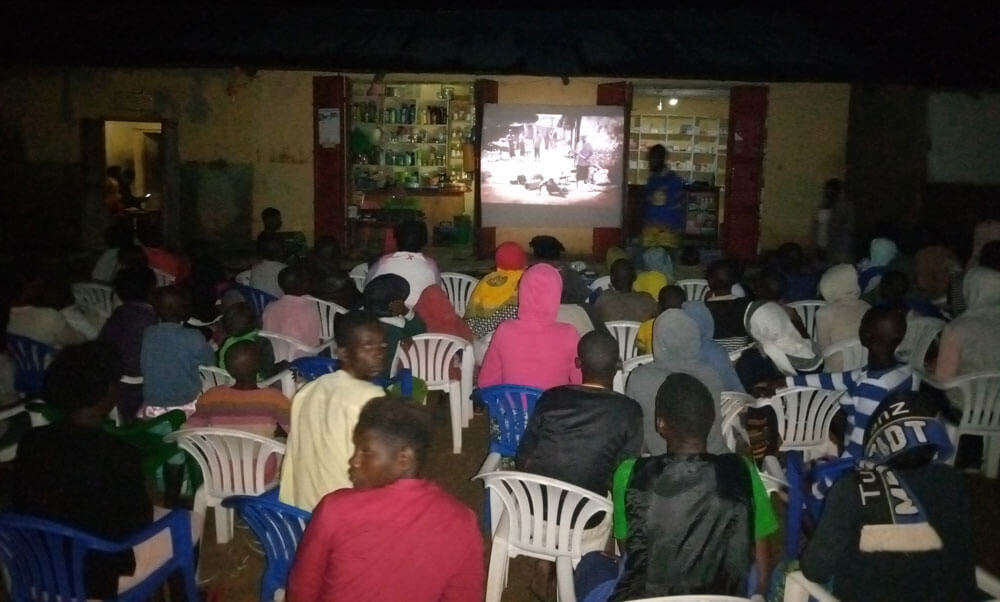 Peggy prayed for ministry tools, and God provided a Solar Kit through GNPI.

The Solar Kit is my foot in the door with people. The Solar Kit allows me to move easily from place to place with a very portable projector, speakers, battery, and cables in my backpack. My non-profit organization evangelizes, it's all we do. I go where most refuse to go, due to the threat of danger. But God provided this equipment, and I go absolutely anywhere using it to tell people about Jesus.

Peggy uses some of GNPI’s films created by their teams in Africa. She also uses the Jesus film and Walking With Jesus film in several languages in various schools.

I was told I would never get it through airport security. I thought I might lose my life because I had that equipment with me, but we've been traveling with it. Taking this Solar Kit to refugee camps, slums, and deep villages where there is no power assures that hundreds of people will come to watch these films. We have showings in prisons, at crusades, in schools, churches, everywhere! These films continue to change countless lives. For prison ministry, it's a miracle, and there has been a great response to the Jesus film on the Solar Kit. 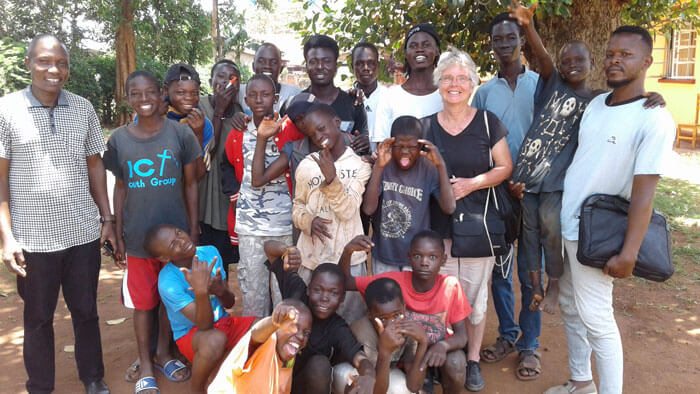 Now many are accepting Christ as Savior, and local pastors follow up.

We have shown the Jesus film, both the one-hour and two-hour versions, maybe 100-200 times or more, I don't know for sure. We have presented them in many prisons. We have shown Walking With Jesus countless times also. We hang our sheet between two trees after dark, and hundreds of people watch from both sides at the same time, it's just a mirror image. Without the solar equipment, my ministry would fail. The Solar Kit is what I promote first in all the outreach I do because films are a huge draw. I'm telling you, these people stand the entire two hours watching, listening, and often choosing to accept Christ as their Savior.

I always have local pastors there for follow-up when I show the Jesus film. People come and pray. We strongly encourage discipleship. We don’t stop with the Jesus film. I also work to stay in contact with people through email and WhatsApp.

I can be in Kenya, Uganda, or Rwanda. I will go anywhere that God allows me to go and will talk about Jesus. God has taken my mess and given me a message. 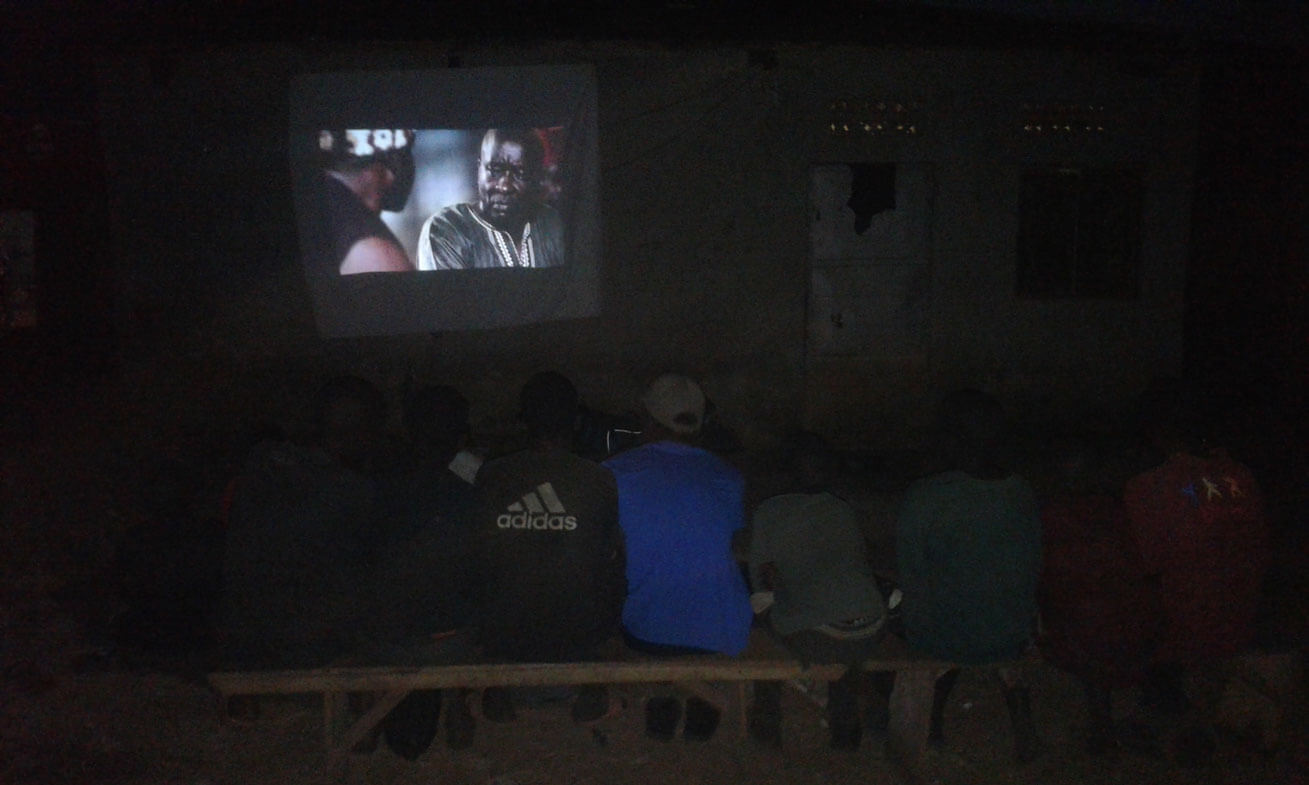 Peggy loves prison ministry and the opportunity to walk into a prison and tell the inmates that they’re not alone, that Jesus loves them, and that he is carrying them.

They listen, and I’ve seen tears rolling down their faces. It’s a simple, straightforward message that Jesus loves them and is never going to leave them. No matter what they’ve done, if they ask for forgiveness, Jesus forgives them. We pray, and they accept Christ. We’ve been in a prison where 64 men and women accepted Christ. Another time, more than 50 accepted Christ. We have local pastors with us, and we encourage them to disciple these men and women in the prisons.

We’ve seen a prisoner who was released after being incarcerated for years and years. I met him in the market one day. He told me that he’s in church, and he’s serving the Lord. He went back to the same prison with us, and he gave his testimony to the inmates, and they remembered him. To me, that’s a powerful testimony! That’s why I’m working where I am, going into refugee camps. People are broken. I sit down beside them and just talk about Jesus. I’m not there to judge them; I’m there to love them to Jesus. These are people that I can identify with and that I care about. I’ll stay as long as Jesus wants me here.

Peggy’s prayer is for God to work in and through her as she shares the gospel with a Solar Kit. Click here to learn more about this tool. She believes it’s an honor and a privilege to watch God change lives in Africa.